Appearing on the program is Mark L. Louden, professor of Germanic linguistics and co-director of the Max Kade Institute for Germanic-American Studies at the University of Wisconsin-Madison. Louden, a leading scholar and fluent Pennsylvania Dutch speaker discusses the origin, evolution and linguistic features of Pennsylvania Dutch, which he has found is a booming language even in the 21st century. Louden talks about the differences between the “Fancy Dutch,” the “Plain People” and the fracturing of the language into different forms…Source. 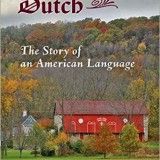