Approximately one quarter of the soldiers fighting for the British during the Revolutionary War were hired German soldiers, often called Hessiansbecause many of them hailed from the German state of Hesse-Kassel. These Hessians fought in the two Revolutionary War engagements that took place on Pennsylvania soil: The Battle of Germantown, and the Battle of Brandywine.

By the year of 1775, approximately one third of the entire population of Pennsylvania consisted of German Americans, most of which lived in Pennsylvania Dutch Country and originated from German States bordering Hesse-Kassel. The irony – of Germans hired by Britain to fight against the interests of German-Americans living in a British colony – was not lost on a fledgling American government looking for creative ways to win the war. The US congress sought to tempt these Hessians to desertion with the offer of a 50 acre land grant and the lure of settling down with a large and culturally sympathetic German-American population.

After the conclusion of the Revolutionary War nearly 5000 Hessians apparently felt their futures brighter in North America than in their homeland and decided to stay in the United States and Canada.

Related Posts
Hessian Powder Magazine is all that remains of major Revolutionary War logistics base at Carlisle Barracks
Legend has it this structure was built by Hessian prisoners captured by George Washington during his famous raid on Trenton the day after Christmas in 1776. Source: Hessian building is all ... 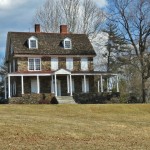