↓
Home Menu ↓
Home→Environment→Lehigh Valley residents seeing coyotes all over the place, can mountain lions be far behind?

These days, residents of Bethlehem Township’s Hope Ridge condominium community are keeping a watchful eye out for stealthy omnivores that have roamed the earth for hundreds of thousands of years.

Source: Lehigh Valley residents seeing coyotes all over the place – The Morning Call

Coyotes, bears and bald eagles are all making a comeback in Pennsylvania Dutch Country.

The indisputable resurgence of these species leads one to ponder long standing speculation as to whether or not the legendary mountain lion too has returned to reclaim its territory. Some biologists are saying that even though they might not be here yet, it’s only a matter of time until they return. The return of coyotes in large numbers to Pennsylvania could bode well for the possibility of a mountain lion re-population because the route that they used with such success – south from Canada into the Adirondack Mountains and then into northern Pennsylvania – would be the one taken by mountain lions as well.

Bryan Markley reported seeing one in October of 2014 the small town of Dillsburg in northwestern York County. An experienced hunter, he was convinced that what he’d seen was a mountain lion and not a bobcat or large house cat as is often the case. But his account was dismissed by local police, who, along with PA Game Commission representatives, are ordered, if and when reports such as Mr. Markley’s surface, to tell a gullible public that there are no mountain lions in Pennsylvania. 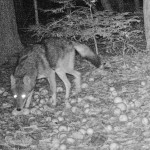