UPDATE: You can find the full PA Books episode featuring Corinne and Russell Earnest discussing their book ‘The Heart of Taufschein’ here. 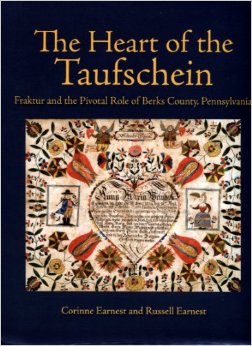 The Pennsylvania public affairs network PCN will be be broadcasting a special, in-depth interpretive episode of PA Books entitled The Heart of Taufschein on Sunday March 9th at 9 PM.

The program will feature Corinne and Russell Earnest discussing their book on the history of the Pennsylvania German folk art of decorative birth certificates known a Taufschein. Go here to find the channel on your local cable provider.

The Heart of the Taufschein Fraktur and the Pivotal Role of Berks County, Pennsylvania is available on Amazon.com

VIDEO | “The Heart of the Taufschein” on PCNTV
Contemporary artists find resonance in old folk tradition
→ Contemporary artists find resonance in old folk tradition — NewsWorks
Relaying religious messages to early Pennsylvania Dutch frontiersmen
As devout a Christian people as the Quakers were, they did not express their religious belief as dynamically as the Pennsylvania Dutch/Germans, whose American Folk Art spilled over from the ...
More Than Buggies & Hex Signs: Who Were The Schwenkfelders?
Visitors coming to Pennsylvania from outside the state often associate Pennsylvania Dutch culture with the Amish of Lancaster County, sometimes even assuming that the group is representative of all Pennsylvania ...

VIDEO | Expressions of Common Hands: Folk Art of the PA Dutch
Originally produced in 1998 for PBS, this documentary traces the arrival of the PA Dutch in America, along with their visual culture. Synopsis: Explores the handicrafts and traditional arts of the "Pennsylvania ...