According to the article coriander is used in the eastern counties (Berks, Lehigh and Northampton) of the Deitscherei whereas in the more westerly counties, like Lancaster and York, sage is the tradition.

“In a large kettle or farmer’s boiler, over a good fire, cook pork bones, heart, liver and any other meat until the meat falls off the bones. Stir often. Dip meat out and onto a tray and let it cool until it can be picked off the bones. Sort meat from bones; discard bones and grind meat. Dip broth from kettle and strain to remove any bones. Measure the broth. Lower the fire. Combine:

• 4 pounds cornmeal added when the above is hot

Heat to boiling and cook 15 minutes, stirring constantly. Add six pounds of buckwheat flour gradually (sprinkle by hand slowly and stir so lumps do not form). Cook until boiling. Add whole wheat flour as needed to thicken. Entire contents will separate from sides of pot. Quickly scoop scrapple onto pans and let cool.”

Related Posts
How to make Hogmaw (G’fillte Seimawe)
→ Festive post-pub noshtastic neckfiller: HEARTY HOG MAW - The Register Hogmaw is a dish with ancient origins in southwest Germany and Alsace that was brought over with the 18th century German immigrants ...
Mount Wolf woman’s shoofly pie best in Pennsylvania (with recipe)
→ Mount Wolf woman's shoofly pie best in Pennsylvania with recipe - York Dispatch Beating out 31 other competitors, York County resident Bonnie Billet won the blue ribbon for best pie ...
Recipe for Pennsylvania Dutch chicken pot pie
In the Pennsylfaanisch Deitsch dialect this popular dish is known as hinkelbottboi. Susan Donecker of York, Pa., got this recipe from her grandmother Effie Meyers, of German descent, who got it from her ... 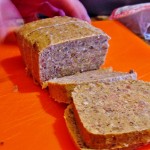 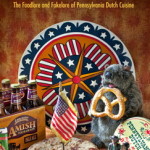